The Shiba Inu, also called the “little brushwood dog” is a compact, friendly dog that received worldwide recognition after becoming a meme and the doge dog breed. Originally from Japan, the Shiba Inu is the closest domesticated, living ancestor to wolves.

Unlike other dogs, there’s no real origin story for the Shiba Inu. Researchers do, however, know that they’re from Japan and were used as hunting dogs by 300 B.C.E., with some believing the breed can be traced back as far as 7,000 B.C.E. The smallest of the six Japanese spitz breeds, the Shiba Inu breed has a long history that showcases the breed’s hardiness.

In the late 1860s, during the Meiji Restoration, the Japanese people saw an influx of imported dogs from the west. These dogs were quickly crossbred with local breeds, with many of the most popular mixes containing some sort of Shiba Inu. These designer dogs quickly became viewed as a status symbol in Japanese culture, and the traditional purebreds were old hat.

By the 1910s, purebred Shiba Inus were hard to come by, and the 1920s saw the breed go nearly extinct. In 1928, a campaign was started to preserve the few remaining Shiba Inu in the country however these efforts were put on hold when WWII started. After the war, the breed once again faced the possibility of extinction due to food shortages and a distemper epidemic.

To prevent the breed from going extinct completely, three separate bloodlines were interbred: the Shinshu Shiba, Mino Shiba and Sanin Shiba. This program created the Shiba Inu breed as we know it today. By the 1950s, the breed was in the United States and quickly began to spread around the world.

Today, Shiba Inus are the most popular breed of companion dog in Japan and quickly rising in popularity across the world. Interest has continued to grow, and the breed was the second most-searched-for dog breed in the U.K. in 2021. This feisty and friendly breed has a bright future in many U.K. households.

Shiba Inus may not be the best choice for first-time pet owners. While there’s nothing cuter than a Shiba Inu puppy, the breed’s rarity as a pet and cunning intellect can be difficult for those with no exposure to the breed. Once deciding the breed is right for you, make sure you obtain a dog or puppy from a reputable rescue centre or breeder. 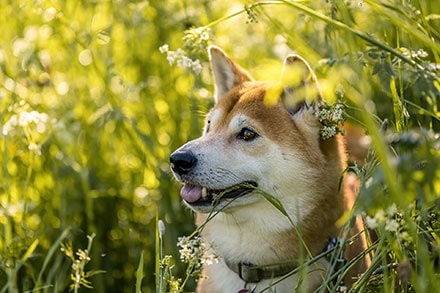 Up to 1 hour a day
Exercise 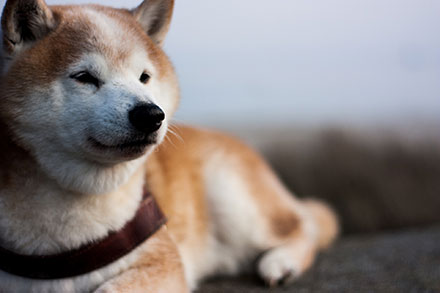 Shiba Inus are boisterous, feisty and fun little dogs that are dedicated to their families. As one of six Japanese dogs in the spitz family, they carry many of the same traits one might expect from other spitz breeds.

The breed is exceptionally confident, not unlike the foxes it resembles however this confidence comes with a very playful side that makes it perfect for families. An inquisitive breed, these dogs will enjoy being in the middle of everything in the house, keeping you company at all times.

However, while Shiba Inus make excellent companions, they also like to exert their dominance when possible. If dominance is not established in your family early on, you may experience behavioral issues down the road. Shiba Inu owners shouldn’t come across as aggressive, with the breed best responding to a firm but affectionate alpha.

Due to their heavy use as hunting dogs, Shiba Inus possess a very strong prey drive. Coupled with their naturally independent and stubborn nature, these dogs do best on a lead and should not come into contact with smaller animals in the garden.

Shiba Inus cannot bark; however, they possess an assortment of unique vocalizations that make barking unnecessary. Instead of barking, many will make a noise that’s best described as a yodel. Other noises you’ll likely hear include purring when content and the “Sheba Scream” if frightened, annoyed or excited. While these noises may seem odd, they’re closer to what the first domesticated dogs would’ve sounded like.

Due to their curious and stubborn nature, Shiba Inus can quickly find themselves in trouble if not carefully watched. While they do not require as much exercise as other spitz breeds, they need at least 40 minutes of exercise/play per day to keep them out of sticky situations.

Because of their compact size, Shiba Inus are perfect for people with small gardens or who live in a flat. They will need a walk or some playtime, but this doesn’t need to exceed an hour, making them perfect for those who don’t want to spend hours exercising their dog.

Shiba Inus are easily trained; however, their stubborn nature means they may not always listen to your commands. The main thing to remember is that you need to be patient and considerate with the breed, and soon you’ll have a dog that will happily listen to you (most of the time).

Their independent and aloof nature makes them perfect for those looking for a dog that’s not going to demand all of their time. While a Shiba Inu will want to follow you around the house, this stems from their curiosity rather than needing constant attention. If you’re looking for a cuddle bug, the breed may not be the right choice for you.

Due to their intelligence, Shiba Inus have a very firm understanding of what’s theirs, and will also lay claim to things they want. This can lead to possessive, aggressive behavior towards anyone disturbing their things (including people). To break this habit, it’s important to socialise early on and teach your dog to share its toys and food at a young age.

Speaking of food, Shiba Inus are extremely food-oriented. While this is great for getting them to do tasks or tricks you need them to accomplish, it can also lead to significant weight gain and health issues if feeding gets out of control. To keep your dog in tip-top shape, you need to limit treats.

The breed is notorious for the “Shiba Scream,” and it’s shocking when you hear how loud it is. While this sound can feel obnoxious, it’s your dog’s only way to communicate with you. That being said, it’s not uncommon for the dog to make the noise when left alone—especially if you don’t play with your Shiba Inu before leaving. To avoid your neighbors banging on your door due to your new friend’s noises, make sure you let it get some energy out before you go to work.

Finally, due to their high prey drive and distrust of other animals, Shiba Inus may not get along well with other cuddly friends you already have in the house. To avoid any issues, make sure you introduce new animals slowly on neutral ground to properly introduce your new Shiba Inu to its family. However, if a young Shiba Inu dog is introduced to other pets early, you likely won’t have issues between them. 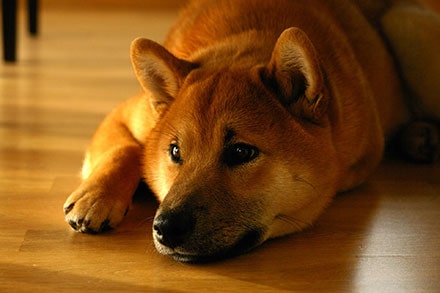 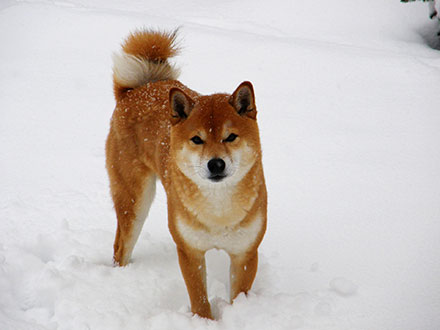 Thanks to their long double coat, Shiba Inus are well insulated for long winters.

Like other spitz breeds, Shiba Inus will go through two shedding phases over the year: one in the spring and the other in autumn. The shedding seasons can be tough for owners as the dog will leave large amounts of fur around the home. However, shedding isn’t limited to those months either. To prevent frustration, try to brush your dog at least once a week during the winter and summer and daily during the fall and spring.

During the summer months, Shiba Inus can easily become overheated. While it may be tempting, it’s important to avoid shaving your dog as its hair will grow back thicker and woolier than it was before. Instead, take your dog into a professional groomer or take over its grooming needs yourself to strip the dog’s fur as necessary.

During the winter months, it’s easy to assume the dog needs limited grooming however you should brush it at least once a week and check its hindquarters and belly for burrs, gunk and matting as these can lead to irritation. Your groomer may even suggest a light trim if necessary.

Grooming demands may seem like a lot, but a properly groomed Shiba Inu is a happy Shiba Inu (and looks like the dogecoin dog).

Patella Luxation is a relatively common problem that occurs when the patella is not properly lined up. This causes the Femur (thigh bone), Patella (kneecap), and Tibia (calf) to slip out of place. When this happens, the dog will generally skip or hop.

There are four grades, ranging from I, an occasional luxation causing temporary lameness in the joint, to grade IV, in which the turning of the tibia is severe, and patella cannot be realigned manually.

The constant rubbing caused by this issue can lead to arthritis, a degenerative joint disease and severe levels of Patella luxation may require surgery to avoid further issues and pain.

Dogs suffer from allergies in much the same way that humans do with the three main types being food, contact, and inhalant.

As the saying goes – prevention is better than a cure.

Treatment for food allergies is as simple as eliminating certain foods from their diets.

Contact allergies can be anything from shampoos, to flea powders, and other chemicals. If you notice your pet has had a reaction, try a new product with different ingredients.

Inhalant allergies are caused by airborne allergens such as pollen and dust. This is a difficult one to avoid, but you can try to do so with vet recommended medications and environmental changes.