The Rhodesian Ridgeback is considered a 'Renaissance hound.' The hallmark of this breed is the stripe or ridge of hair that grows backward on its back.

The breed was first recognized in Africa due to its high level of skill at baying and tracking but never killing lions. Today, the Rhodesian Ridgeback is a cherished family dog that provides a loving companion, great guard dog, and protector.

The breed can be traced back to the 1500s when European immigrants took several dog breeds to South Africa with them. The people settling in these areas needed a quality hunting dog, companion, and protector.

While in South Africa, the dogs were bred with the partially wild "ridged-back" dogs used by the natives to the region. Several breeds likely contributed to creating the modern-day Rhodesian Ridgeback, including terriers, greyhounds, Great Danes, bloodhounds, and Mastiffs. The dogs were used for hunting all types of games at this time.

In 1877, the ridgebacks were taken to Rhodesia, which is known as Zimbabwe today. Here they were raised and further bred to serve hunters. The resulting breed was called the African lion hound, as they were used for hunting lions exclusively. They were also used for hunting boar.

Keep reading to learn more about this breed, its behaviours, and its characteristics, and then decide if it is the right breed option for you and your family. Taking time to do this will pay off and ensure you get a dog that will meet your needs and living situation. Remember, not everyone is suited for a large dog, so make sure you can accommodate their needs. 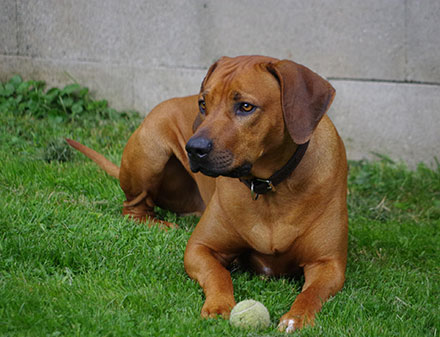 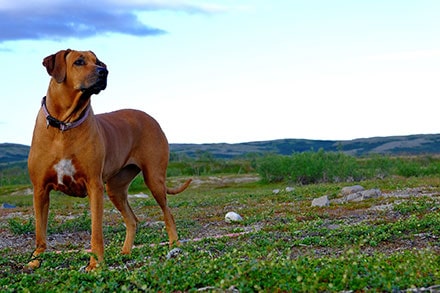 The Rhodesian ridgeback is considered an extremely active and athletic dog that requires plenty of physical and mental exercise. It's also recommended that you keep this breed on a leash and controlled because they tend to chase anything they see moving. Effectively controlling a large and excited dog on a leash can be difficult for experienced owners, not to mention new ones.

The breed does well in dog sports, including lure coursing, obedience, and agility. Finding your dog something they enjoy doing can help prevent anxiety and boredom, leading to destructive behavior.

It's important to note that the Rhodesian ridgeback is an independent and intelligent dog. Proper obedience training is recommended, and they tend to do well once trained. This is also extremely important for larger dogs, such as the Rhodesian. Remember, many large dogs aren't aware of how big they are, which means you must maintain control.

The ridgeback also likes to dig and will create holes to help them cool off when it is warm outside. They may also become masters at escaping a fenced-in space, as they have a bad case of "wanderlust." It's important to install fences that can't be jumped over or dug under. Due to the breed's high prey drive, they will chase almost anything and quickly disappear with no concern for where they are going.

Once trained, your Rhodesian ridgeback will be loyal and gentle to its human family but could be slightly reserved when strangers are around. You must begin socializing your dog at a young age. Doing this will help your Rhodesian adapt to new environments, animals, and people quickly.

The Rhodesian ridgeback is best suited to an experienced dog owner and someone who has trained and managed larger dogs in the past. If the dog is trained to get along with kids, it may also be a smart option for families with children.

If their basic activity and exercise needs are met each day, the breed will do well in apartments or larger homes. Remember, this is a large dog, with females reaching up to 31 kg and males reaching up to 39 kg so you need to consider if you have enough space for them to grow and thrive.

While this is true, in most cases, this breed is extremely adaptable. Because of this, they will make a great pet in almost any setting.

It's worth noting that if your Rhodesian ridgeback is male and remains unneutered, they may show aggression toward other male dogs. They are also likely going to chase cats and other small animals unless they are raised with them due to their high prey instinct. 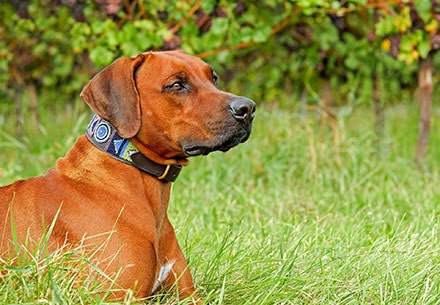 The smooth, short coat of the Rhodesian Ridgeback only sheds a small to moderate amount because they don't have an undercoat as other high-shedding breeds do. While this is true, brushing them regularly with a rubber mitt or curry brush is recommended, as this will help eliminate any loose hair and dirt and maintain a glossy coat. It also helps to massage the skin, which improves blood circulation and spreads the natural oils in their coat.

It's also a good idea to bathe your Rhodesian every eight to 12 weeks to keep them looking their best. Do not bathe them more than this because it may irritate their skin and damage the production of skin oils. It's best to use a shampoo specially designed for dogs and one made with natural ingredients. Some Ridgebacks aren't keen on bath time, so you will benefit from taking time to help them grow accustomed to the routine at a young age so they don't resist your efforts in the future.

Not much more than a basic grooming routine is required to keep your ridgeback healthy and clean. You need to keep their nails trimmed and ears cleaned to help avoid ear infections. If you allow their nails to grow too long, they can cause issues when the dog tries to walk or run. While some dogs in this breed will resist nail clipping, using a nail grinder may be acceptable to them. Also, brushing your dog's teeth regularly is essential for long-term good oral health.

Unlike many other large breed dogs, the Rhodesian ridgeback doesn't drool excessively. Overall, this is a clean dog breed, which makes it an appealing option to many people who like the idea of a large dog, but don't want to deal with high drool levels.

A responsible breeder will work to maintain high breed standards. Dogs that are bred based on these standards are much less likely to develop any type of hereditary condition, although it is never guaranteed.

While this is true, some hereditary issues may develop in this breed. Some of the most common include:

To help maintain your Rhodesian ridgeback's health, proper nutrition is a must. It is recommended that you purchase high-quality dog food, and either commercial manufactured, or homemade options will be suitable. It's important to ensure the food you give them is age-appropriate (puppy, adult, or senior).

The Rhodesian breed is a well-known 'counter surfer,' which means you should never leave 'people food' unattended. Also, the breed is prone to getting overweight, so you need to watch their calorie consumption and weight.

While treats are an effective tool to use during training, if you give them too many, it may cause obesity. It's also important to learn about what human foods are safe for your dog and which ones are not. Also, it's not usually a good idea to give a Rhodesian ridgeback puppy human food.

Remember, this breed is not good at self-regulating when it comes to food, so to ensure your Rhodesian ridgeback size does not become too large, be sure to monitor what they eat. It's also recommended that you speak to their vet if you are concerned about their size or weight. 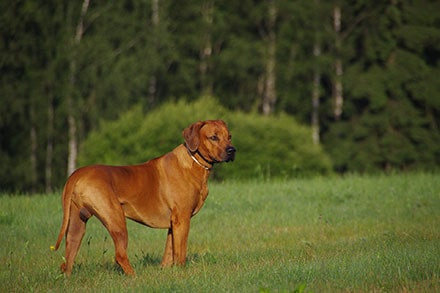 The Rhodesian ridgeback breed possesses dominant and independent traits which can make them difficult to manage for novice, first time owners.

It can be tricky to get your pup trained, and they don't always get along with other dogs. Because of this, they may not be suitable for all homes and families.

While this is true, if you can meet their needs and offer a firm yet fair hand, you may have found your ideal companion and guard dog.

Now that you have reviewed the information in this breed guide, hopefully you are in a better position to decide if you want to adopt a Rhodesian ridgeback. With average exercise needs and an easy-to-groom coat, care is simple and straightforward. While the dog may be 'tricky' to handle at first, if you remain consistent and firm, everything will work out for you both. Being informed and knowing what to expect will help you make an educated decision regarding if you want to be a Rhodesian ridgeback owner.

Insure your Rhodesian Ridgeback today with lifetime cover from as little as £12.11 a month