The Old English Sheepdog is a large dog breed developed in England in the early 19th century by crossbreeding different pastoral dog breeds. In the 19th century, this dog breed was known as Shepherd's dog and bob-tailed sheepdog.

The name bob-tail was frequently used to refer to these dogs as the dogs of this breed often had their tails docked. Fortunately, this is no longer the case, as most countries have now banned docking.

These dogs have a short and compact body, and the colour of the coat varies between any shade of black, grey, grizzle, blue merle, or blue. They also have a water-resistant undercoat. Old English Sheepdogs don't shed their coats until brushed.

This dog breed made its way into the United States in the 1880s and soon attracted the attention of America's wealthiest people. The Old English Sheepdog breed is now a famous show dog. 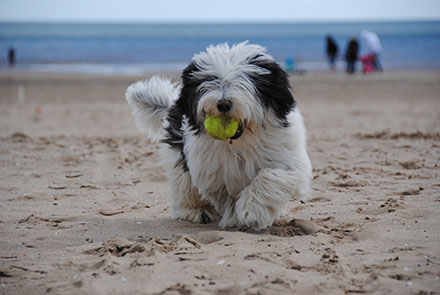 It's often said about the Old English Sheepdogs that they are neither aggressive nor nervous animals. These dogs love to spend their time lying on couches. Due to their ancestral history as pastoral dogs, they often try to herd children by gently bumping them.

Due to their pastoral nature, Old English Sheepdogs feel comfortable in rural settings such as farms. Wide-open places and greenish areas are the ideal settings for this dog breed. However, they can also live in urban areas if they are provided with enough space to exercise and play.

Old English Sheepdogs need to be taken care of like a child. That's why the owners of this dog breed should be well prepared to devote their time and attention to them. Their lively and friendly personality makes them easier to deal with.

These dogs are incredibly affectionate around kids and other pets. They are excellent watchdogs and possess a loud bark. Owners should keep their Old English Sheepdogs away from heat as they tend to dislike it. 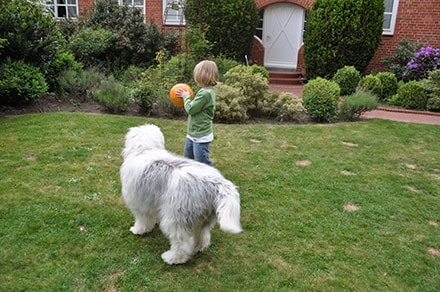 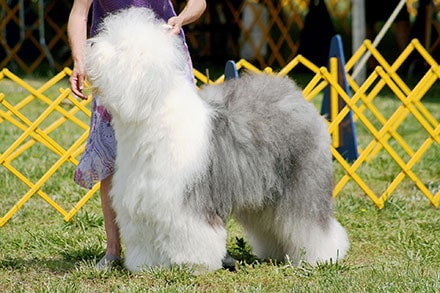 You should start grooming your dog's fur at a very young age to make them used to it. Old English Sheepdog grooming includes cleaning ears, clipping nails, and trimming the coat. Owners should also check their pet's eyes and ears for dust or other foreign materials.

You should keep in mind not to cut your dog's coat too short as it might cause discomfort. A comfortable comb or brush should be used while brushing the coat of an Old English Sheepdog.

Old English Sheepdogs are friendly and do not get irritated when owners groom them. However, if the dogs feel itchy or have some other kind of allergy, then owners should pay special attention to their dogs, such as using a special shampoo that doesn't aggravate the skin allergies. 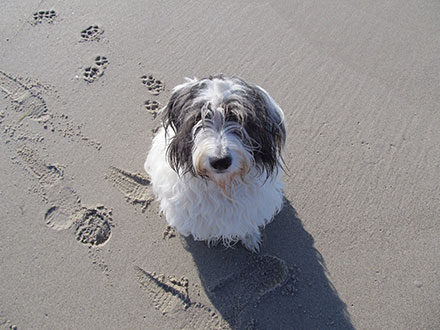 These dogs require high-quality dog food. It can either be commercially manufactured store-bought food or dog food prepared at home. You must be careful as it is incredibly easy to overfeed an Old English Sheepdog.

Their thick coat means you can’t really tell if your dog is overweight just by looking at them. Hence, you should regularly weigh them to ensure they are not overweight.

Hypothyroidism is a disorder of the thyroid gland which is believed to be a cause of issues including epilepsy, hair loss, obesity, lethargy and skin conditions.

This is a disorder that can be quite easily treated through a dog’s diet and medication.

Entropion causes the lower eyelid to fold inward toward the eye. The result is chronic irritation of the surface of the eye.

Fortunately, it can be corrected by surgery.

Glaucoma is a condition that causes pressure on the eye, causing inadequate fluid drainage. If untreated, or it becomes chronic, it can cause permanent damage to the optic nerve, eventually resulting in blindness.

Unfortunately, 40% of dogs with Glaucoma become blind in the affected eye within the first year, regardless of treatment.

Dogs suffer from allergies in much the same way that humans do with the three main types being food, contact, and inhalant.

As the saying goes – prevention is better than a cure.

Treatment for food allergies is as simple as eliminating certain foods from their diets.

Contact allergies can be anything from shampoos, to flea powders, and other chemicals. If you notice your pet has had a reaction, try a new product with different ingredients.

Inhalant allergies are caused by airborne allergens such as pollen and dust. This is a difficult one to avoid, but you can try to do so with vet recommended medications and environmental changes.

Insure your old English sheepdog today with lifetime cover from as little as £10.46 a month