The Irish Terrier was originally used as a watchdog in Cork, Republic of Ireland. It was also fantastic at pest control, tackling everything from rats to badgers, making it a favourite amongst commoners and gentry alike. It is one of four Irish Terrier breeds and, as the oldest, got to keep the Irish Terrier name.

The Irish Terrier used to be known as the Red Devil and played an important part in the First World War when they were used as messenger dogs and were commended for their bravery in the face of great danger.

This breed comes in three colours which are red, red/wheaten and yellow/red. They are a very affectionate breed, although they prefer being the only dog in the home. 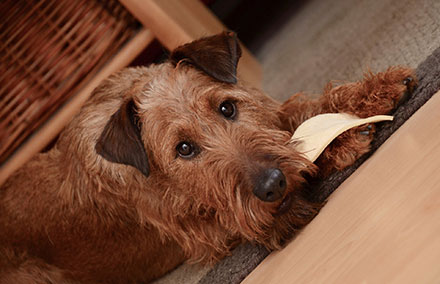 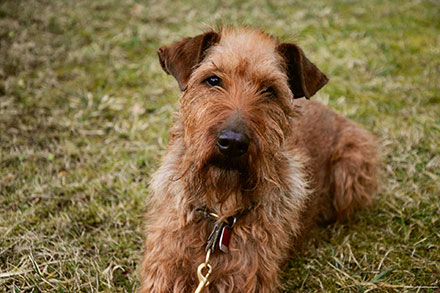 The Irish Terrier is a tough, fearless dog and, given its long working history, can find it difficult to get along with other pets, including dogs. Early socialisation is important with the Irish Terrier breed as is a commitment to proper exercise and mental stimulation, so their energy is properly directed.

However, this dog breed is a wonderful companion that is very loyal and affectionate with its owners if they take the time to train it and allow the dog to enjoy their company. They generally adore children so can make an excellent family pet as long as the usual supervision requirements are met, as with all dogs.

Irish Terriers are smart so they enjoy lots of mental and physical challenges to keep them occupied and use up a lot of that terrier energy, but the rewards are worth it.

As they were used as excellent watchdogs, Irish Terriers can be real barkers, but a good force-free dog trainer will be able to help with that if it becomes excessive.

Irish Terriers soak up training as they are eager to please, but they need lots of exercise. The ideal owners will have the time and energy to take this breed on good walks and teach them tricks to challenge their brains.

This breed can get bored quite quickly though so keep training sessions short to get the most out of them.

The Irish Terrier breed thrives on human interaction and they become very attached to their owner so this dog breed is not suited to be left alone for long periods.

Irish Terriers are of medium size which makes them suitable for house or apartment living so long as they get plenty of opportunities outside to walk and explore.

Given their natural prey drive, gardens should be properly secured in case something furry or feathered gets their attention and they give chase, although time off-lead to roam and follow their nose is important.

Although Irish Terriers make great family pets, they should always be supervised with children, and especially babies and infants. 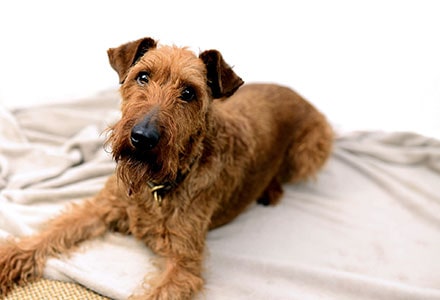 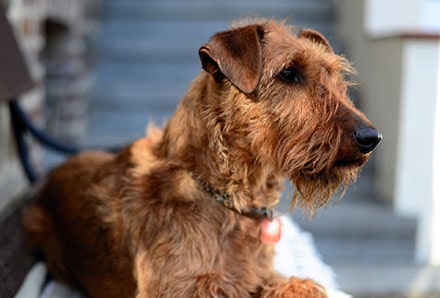 The Irish Terrier breed doesn’t shed quite as much as other breeds as it has as a wiry coat, but underneath is a softer coat that will need regular brushing, at least several times a week.

Hair should be clipped and hand stripped a couple of times a year to keep the coat in good condition, allowing new hair to come through.

Regular brushing will help avoid the need for baths as it encourages natural oils in the skin to coat the hair shaft and help dirt and dust to fall off.

Particular attention should be paid to paws and ears to remove excess hair, keeping them clean and hygienic.

Irish Terriers are naturally fit and healthy dogs, bred to work hard. A good diet, lots of exercise and plenty of care and attention will help this dog live a long and healthy life but like other breeds, they are prone to certain health issues, some of which are listed below.

When our pet becomes ill and needs veterinary attention, it can be very upsetting and, unfortunately, vet treatment can come with a large bill that you weren’t expecting to pay. Thankfully pet insurance can give you peace of mind knowing your dog will get the best treatment with many of the costs covered for you.

Irish Terriers are wonderful additions to the family and Irish Terrier pet insurance can mitigate the costs of many of their potential health conditions such as cataracts, hyperthyroidism and hyperkeratosis. 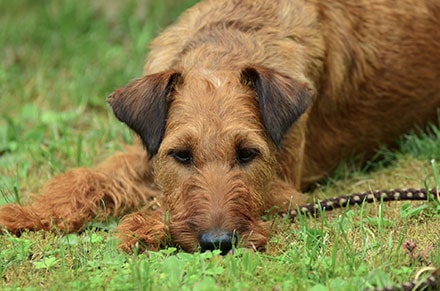 Patellar Luxation is a relatively common problem that occurs when the patella is not properly lined up. This causes the Femur (thigh bone), Patella (kneecap), and Tibia (calf) to slip out of place. When this happens, the dog will generally skip or hop.

There are four grades, ranging from I, an occasional luxation causing temporary lameness in the joint, to grade IV, in which the turning of the tibia is severe, and patella cannot be realigned manually.

The constant rubbing caused by this issue can lead to arthritis, a degenerative joint disease and severe levels of Patella luxation may require surgery to avoid further issues and pain.

Insure your Irish terrier today with lifetime cover from as little as £8.80 a month